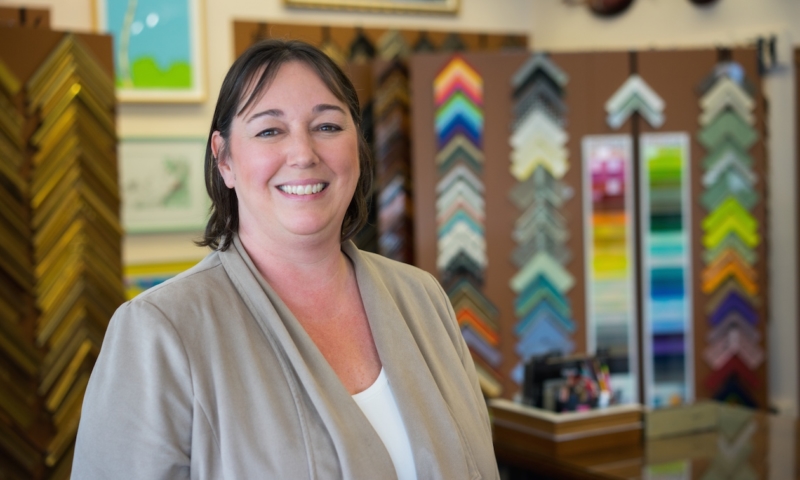 Ahead of the curve: Running a small business in the cloud

A lot of the technological conveniences we enjoy today were but mere glimmers in the eyes of their creators in the late 90s. In 1997, the majority of people were still on dial-up Internet, Amazon was still basically an online bookstore, Netflix had just begun developing a mail-order DVD rental service and we were a decade away from being introduced to our first iPhone.

It was around this time Elisa Spurlin purchased a single store custom picture framing shop in Menlo Park, California. It was part of a franchise that she used to supplement income while launching her own company in the tech sector.

“The transition, permanently, into a brick-and-mortar retail operation was not a planned event,” Spurlin recalls. “Upon leaving one company in the tech sector to start another company in the tech sector, just in a different field, we needed income to survive the transition. We looked for a business that we could buy that would require minimal involvement and provide cash for living expenses until the tech startup progressed far enough along.”

Peabody Fine Art Gallery and Framing, located in Menlo Park, about 45 minutes southeast of San Francisco, was the first of a total of five stores that she would acquire in the following years.

Spurlin mentions the choice to transition from tech to a “hand built, custom crafted trade” was made even easier because the store was already profitable, had marketing support because it was part of a franchise and the existing employees wanted to stay. The first order of business was to do away with dated processes.

“As was true to our background, the first thing we did was automate the existing paper based system,” Spurlin recalls. “We landed in the top 10 in the country for sales and became more and more involved. At the same time, the tech venture we were working on started to hit snags.”

In 1997 Spurlin was looking to create a website for her flourishing custom framing business, which was at this time transitioning into an art gallery. From her background in tech she knew she needed to have an online presence, but it didn’t come without some hesitation from her partners.

“Our goal was to have an online catalog of what was available for each artist that we carried so that people who saw a piece in our gallery could go home and look at more choices and… show their spouse a piece they were interested in without having to sync schedules and drag that person into the store…,” Spurlin remembers. “Trust me, in 1997, this was groundbreaking. My partners didn’t expect to take online orders. I remember having to beg to get an online order form. I got one and orders started to come in.”

Although Spurlin was one of the early adopters of Internet marketing, she has some pertinent advice about online presence and search engine optimization (SEO) that still ring true today.

“We handled all of [our SEO] in the beginning because there was no one to contract with, it was too new,” Spurlin says. “Now, the hard part is making sure you get someone good at it. Everyone says they know the ‘secrets’ to SEO. It’s hard to ferret out who to work with. Also, you have to be committed to an online presence. Outdated content on a website is as detrimental to your business as dirty windows and filth in your brick and mortar.”

Small business is an adventure

Spurlin mentions it’s ironic that her venture out of tech had landed her in a framing business where there were more computers than there ever were in her tech company. What started as a supplemental side gig was now her everyday.

“Saying this was now our full time job was an understatement,” Spurlin says. “Having five locations that are open seven days a week, spanning three counties, with almost 30 employees was much more than a full time job.”

Spurlin offers advice for those looking to make the leap from a 9-5 to launching their own path.

“Every adventure is a different one,” Spurlin says. “But looking back, expect it to be all consuming of your passion and your time; therefore your family must be on board, really on board. Learn where the best happy hours are for food; money will be tight at times.”

She also notes the importance of understanding why people are buying what you are selling.

“Every business has to sell something to earn revenue,” Spurlin says. “You might think you are in the business of selling a particular product or service only to find out that people are buying it for completely different reasons than you anticipated. Your marketing strategies and product development need to center around the customer’s reason for buying, not around why you want to make your product.”

Spurlin notes that technology has shifted tremendously since she started out in the early 90s. Along with this shift have come new opportunities and subsequently new requirements for reaching out to new and existing clients. But just as importantly, she says, technology has changed the way buyers make their decisions.

“Anyone who owns a business is struggling right now with the advertising,” Spurlin says. “Understanding your target market, what they want to buy and now how they are going to buy it is a struggle. Some industries have been hit hard when “price is the only difference” is your type of product. Services are harder to define and communicate in an online manner.”

She also mentions that making sure you are available to your customers in the mobile world “is a must”. While she is constantly looking for the most effective means of outreach, the means of measuring success is much harder than it used to be, noting, “it’s not simply count the number of coupons that get returned from a mailer”.

While on the topic of technology, Spurlin offers her insights on running her business in the cloud today. She mentions Peabody’s website was the first part of her business in the cloud, followed by their payment processing system and then their security system. Most recently, she has moved their accounting and payroll software to Xero. This has helped her move to a virtually paperless operating model. Xero’s dashboard enables small business owners like Spurlin to monitor sales – whether they have many locations or just one – and ensure they’re cashflow-positive. Retail business owners can also use Xero to track both online and offline sales.

“Moving to Xero has afforded me the freedom to have whatever form of computer I want now at that station at my store,” Spurlin says. “I am not tied to a specific operating system or device.  I can now make that a system that can be used for showcasing product. It has also afforded me a little extra cash to spend on other items. I was paying annually for a system that had outgrown my needs. What I have chosen is a much better fit for my business.”